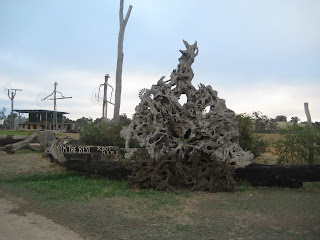 ﻿I could have been in Nashville but nobody was packing any heat. I was in in fact at Boyup Brook Western Australia  for their famous annual country music festival. The little town was packed with caravans of every shape and size, awash with folk in checked shirts, denim and assorted cowboy hats, and a wannabe Slim Dusty on every street corner with his twanging guitar. For those of you who know me well this was not my idea of heaven..........country and western music is my "bete noir" and is apt to push me over the edge if listened to when I am feeling low.........another sad song of "he gone and done me wrong, now the dog has died and I'm in jail" is enough to make me want to commit bodily harm to my person........however I am now married to a fan of all things country so compromise is the key. By the end of the week I was foot tapping along with the rest of them. My favorite a blind guitarist called Lorin Nicholson a man with real vision and speaking the universal language. Mind you......we had a young girl playing next to us at the street market, who moaned her way through every song in her repertoire and definitely needed to be put out of her misery.  I could have cheerfully shoot her myself , there is only so much one can take. 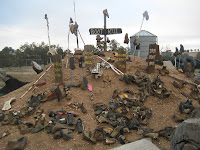 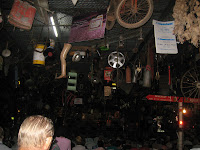 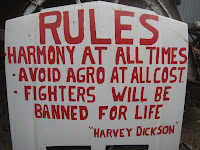 We stayed at Harvey Dickson's a few miles out of town, a rustic campsite, no power or water but at only $8 a night whose complaining We took lots of al fresco showers and enjoyed the dusty solitude.........and merciful silence. We went to a "brekky showdown" in his shed, the ceiling of which is festooned with objects from yesteryear and a stage dedicated to the KING. Some wonderful Bush Poets, regaled us with humorous Aussie verse,so funny we cried with laughter.
Tommy became the talk of the town, winning first prize and $300 for his "bush sculpture"entitled "Sacrifice". I have an amazing husband who has more chutzpah than anyone I have ever known. While we were at Quininup he spent time picking up old iron railway sleeper nails, barbed wire and gnarled bits of wood, and using some of my beads magically turned them into works of art. I was so proud of him! Trouble is we are now living with "an artist" they need lots of TLC
﻿﻿﻿ ﻿﻿﻿
It must be a weatherman's heaven,forget the precipitation he has far more exciting scenarios  like heat waves,﻿cyclones, flash floods and now bush fires to report on.. Enough already! Give us a break,  please.  In the last few weeks we have run through every weather  imaginable except perhaps snow! At the beginning of the month Tommy and I had the misfortune of being in the wrong place at the wrong time. We had to go back to Armadale Hospital for Mr T's  annual checkup and as we drove into the outskirts of Perth we hit smoke. I had booked us into  a quaint chalet in the hills above Armadale, right next to a picturesque dam and with stunning views. We realized something was wrong when the proprietor came out to greet us and to tell us there was no electricity. As we got out of the car and gazed across the hillside below us all we could see were hugh billows of smoke.  He said we were in no immediate danger as the wind was blowing away from us but we felt uneasy. As we unpacked  we heard a terrific noise as a helicopter dropped down to suck water up from the dam right outside our room to water bomb. We realized that  the  fire was obviously nearer than we thought.  Then a ranger came past and advised us to leave.........so we hastily crammed everything back into the car and made a quick getaway.. Armadale was chaos with frightened people flocking to the town hall, for safety. Most of them had lost everything and had escaped with what they stood up in, many had their pets in their arms. It was a sorry sight but thankfully no loss of life,and started by an off duty policeman using his angle grinder. I don't fancy being in his shoes with over 80 homes lost, he's got a unhealthy amount of guilt to deal with poor man.
We are now camping at Cheynes Beach, on the south western coast, trying to catch some fish but not with much luck.......not biting!

Had an enjoyable couple of evenings with Jan and Brian Beattie and this is Jan's recipe for a delicious heartwarming soup.
Especially good after an alien sighting on the Nullabor!

Place in a large saucepan and cover hock with cold water and add some salt. Cook until meat is falling off the bone, a pressure cooker will do this in a jiffy. Remove hock, put aside to cool. Add the following, all chopped finely.grate ginger and crush garlic.

Disolve stock cube in one cup of liquid, bring to the boil and cook until noodles are soft. Meanwhile take meat off the bone and chop into small pieces. Add to soup.

Delicious, enjoy with some crusty bread.
Posted by soulfood traveller at 3:08 AM