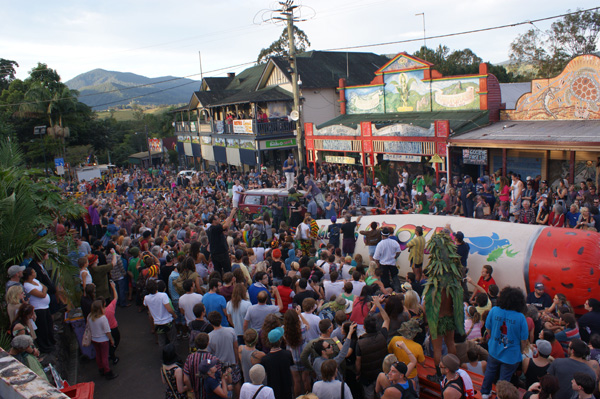 Once upon a time there was a little village called Nimbin, It nestled in a secret valley surrounded by lush rain forest that covered the high Nightcap Mountains. Pockets of mist swirled and spiraled their way through the trees as if they were on fire, and armies of emerald tree frogs chorused as they clambered through the damp weed that carpeted the forest floor. It was home to a rainbow tribe, a happy people known as the Ganja. All day long they sat around smoking a sweet smelling weed that made them feel higher than the mountains they lived in. It was the Age of Aquarius and they believed that when the moon was in the Seventh House and Jupiter aligned with Mars then peace would guide the planets and love would steer the stars.

Once a year on the first weekend in May the Ganja Faeries would appear and dance through the village to signal the start of a special MardiGrass festival to celebrate all things Ganja. Thousands would come from far and wide to take part in the fun and frivolity of a Prohibition Protest Rally, and to compete for the coveted Ganja Cup. The Hemp Olympix included the Bong "Throw'n'Yell", a Joint Rolling competition for the fastest and most artistic joint. and the Grower's Iron Person event. Runners must first carry a 20 kg sack of fertilizer, then a bucket of water, and finally "the crop", as a tribute to the difficulties faced by growers in the hills, and to show that the Ganja are fit and healthy. At nightfall the Harvest and Picker's Ball, rocked on the village Green and poets and soulful singers entertained the crowds in the cafes and bars. 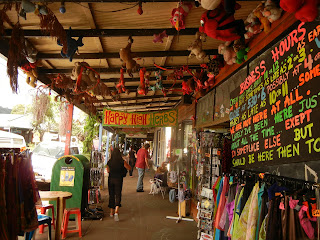 The Lords of Canberra were not amused by the antics of the Ganja and proclaimed a law. Anybody caught growing, selling or even holding the weed would be severely punished. This was hard on the Ganja as it is part of their culture to buy, sell and smoke enormous quantities of their sweet smelling weed on the streets of their village. In fact it gave rise to the local saying “You will smell Nimbin before you see Nimbin” The peace loving Ganja decided to build a museum filled with their artwork and weed memorabilia to show the Lords of Canberra  that they only wanted to be left in peace. The entry fee was to be a donation and if you enjoyed your visit one of the Ganja faeries would give you a special cookie as you left, to help you get over the sadness of leaving Nimbin. So many people came to support the Ganja and those cookies that the Lords of Canberra decided to turn a blind eye on the village and so they all lived happily ever after ………or maybe not....... 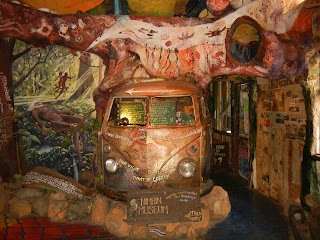 Nimbin, counterculture capital of Australia is a town stuck in the hippie culture of the 60's, an Aussie Woodstock, if you will, but life was not always a fairytale here. Forests of Red Cedar first attracted loggers to the area in the 1840s but they soon cleared the forests and turned to dairy farms and growing bananas. In the 1960s a recession led to the collapse of the industry but in 1973 the first Aquarius Festival and the huge influx of hippies of all sizes shapes and cultures changed life forever. The Festival was the first event in Australia that sought permission for the use of land from the Traditional Owners. After the festival hundreds of participants and festival goers remained in Nimbin to form communes and other multiple occupancy communities, in search of an "alternative lifestyle". Nimbin in fact made legal history for the first ever application of group title ownership of land in Australia. Since the Aquarius Festival, the region has attracted thousands of writers, artists, musicians, actors, environmentalists and permaculture enthusiasts, as well as tourists and young families escaping city life.
I loved it even though it was looking a little seedy around the edges, and the inhabitants on the day we visited were not very lively......perhaps they had all had a rather taxing "smoko" the night before. I sat at a pavement cafe and people watched. I ordered the vegetarian option to try and fit in with the locals,as I was told you always go away happy when you eat something vegetarian in Nimbin.. My "Nimbin Happy Meal" was  rather odd looking dish of falafels accompanied by glutinous mash of something that resembled freshly poured concrete. It did little to whet my appetite,and the green puree was definitely not spinach. A young mum, obviously a friend of the owner by her conversation stood at the table next to me and cheerfully changed her baby's dirty nappy oblivious to the  hostile stares from tourists.
Tommy had the better idea and opted for the standard "Aussie pie" from the local bakery.......but he wasn't half as happy.... but perhaps it was the nappy changing ........

We camped at Mullumbimby another small town in the mountains and drove down to pretty Byron Bay to visit our friends Jean and Ken  We had some great times at Cape Keraudren with them on our travels up the coastline of  Western Australia. It was so good to see them again and share some memories but sadly we had to leave them behind as we continued north and into Queensland the last state on our round trip.  Brisbane and the Gold Coast beckons........land of bananas and rum, now the sound of that makes me happy!

My version of The Nimbin Happy Meal without any added herbs will definitely make you your tummy happy, and "a happy tum is a happy mind"
Ingredients

1.In a large bowl mash chickpeas until thick and pasty; don't use a blender, as the consistency will be too thin. In a blender, process onion, parsley and garlic until smooth. Stir into mashed chickpeas.


2.In a small bowl combine egg, cumin, coriander, salt, pepper, cayenne, lemon juice and baking powder. Stir into chickpea mixture along with olive oil. Slowly add bread crumbs until mixture is not sticky but will hold together; add more or less bread crumbs, as needed. Form 8 balls and then flatten into patties.

3.Heat 1 inch of oil in a large skillet over medium-high heat. Fry patties in hot oil until brown on both sides.


A crisp garden salad garnished with a bright nasturtium flower would be great with this dish,
Put another flower in your hair and you could be in Nimbin.....stay happy!