A new year and new horizons. The start of another journey, but this time, surprisingly we have had some misgivings. The last year was a wonderful year of adventures but it has taken its toll. Perhaps we are tired of travelling and longing for a more permanent base. For eighteen months we have travelled nonstop and are probably suffering from a sensory overload. We have lived the Australian dream but the reality is sometimes a little less romantic!
Our Melbournian friends have an apt saying “ Build a bridge and get over it mate!” this is often accompanied by a whack across the head with a piece of 2 by 4, presumably to get you started with the building of the aforesaid bridge. This is just what we need right now! Enough whining ……..or as they say in Afrikaans “Vat jou goed en trek Druce” A new adventure is around the corner......lets go!

We left the Clare valley with heavy hearts, our plans to buy some land dashed as our home in South Africa didn’t sell. In hindsight a blessing as we still have so much of this wonderful country to explore before we make our decision on a final resting spot.  The valley will remain one of the most memorable places I have seen and we will definitely go back some day.  Our year started with a week of bush camping at Wrights Bay in South Australia. The beach windswept and wild was notable for its seaweed,  which looked liked stands of luminescent green pearls. Small spotted puffer fish littered the sand which the disgusted local fishermen seem to catch and discard in large numbers .We celebrated our second wedding anniversary with a a rock lobster dinner and a bottle of bubbly under the stars To say it was  windy is an understatement. Most nights we were rocked to sleep in the van and eventually it swept us right out and into a new state Victoria.


Over the border, the local Mexicans gave us a warm welcome in the little fishing village of Nelson. It was a great base to explore Mount Gambier and its extinct volcanic crater lakes. The most famous, Blue Lake, whose water is normally a dull grey blue has a metamorphosis every November and  turns a brilliant cobalt and remains that way for the rest of the summer. The colour change is apparently caused by calcite particles in the water which absorb all visible light except blue. On a sunny day it is quite a magnificent sight. We had our lunch in a sinkhole........another first. In 1884 James Umpherston set out to create " a pleasant resort in the heat of summer" and  a sinkhole was turned into a beautiful garden,with terraces, rock walkways and even a small lake in the bottom. Today with ivy hanging over the edges and filled with fuchsias, hydrangeas, ferns﻿﻿﻿﻿﻿﻿ and roses it is a quiet and peaceful spot in which to dine.

﻿ ﻿﻿﻿﻿﻿﻿﻿﻿﻿﻿﻿﻿﻿﻿﻿﻿﻿﻿﻿﻿﻿﻿﻿﻿﻿﻿﻿We were headed for Melbourne but couldn't resist the lure of the mountains so did a detour to the rugged ranges of the Grampians National Park. A wrong turning took us over a spectacular mountain pass. It was the first time we had taken the rig on such a climb and we had some heartstopping moments going around tight corners downhill. We arrived shaken and definately stirred hours later to our camp at Halls Gap and vowing never to repeat the experience.

The Crimson Rosellas and Sulpher Crested Cockatoos made up for our frightening descent. Every morning was a riot. Sometimes as many as 30 cockatoos  joined us for breakfast . The three bright red and blue Rosellas were my favorites. So trusting they would sit on my hand and  I could feed them a  single sunflower seed which they would  nibble delicately  However the love affair soon wore off and ended altogether when  the cockatoos decided to eat the chairs and then pooped  in disgust all over them when they tasted the vinyl. We eventually had to keep the door of the van shut as they were happy to take up residence inside if they could spot some tucker.

Next stop Melbourne and a time to catch up with our friends Chris and Terry who we met in Katherine, Northern Territory.
We are looking forward to it! See you at Point Leo guys! Get the wine ready.............

I was tempted to give you a recipe for Roasted Crested Cockatoo with a vinyl jus ..............  but this salad I had in a local resturant is more delicious and so quick to make. 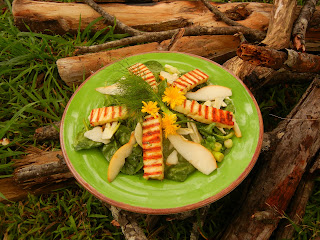 Prepare a salad with a handful of fresh coriander, some baby spinach leaves, half a fennel bulb cut into fine strips and a thinly sliced ripe pear.
Dress with generous glug of extra virgin olive oil, red wine vinegar and a squeeze of lemon. Season with black pepper and a sprinkle of fennel seed and rock salt.
Cut Haloumi into slices and cook on a ribbed frying pan over a high heat till golden brown or under a grill.
Place on top of the salad and garnish with a fennel frond. Serve with a crusty roll and glass of chilled Chardonnay.
A marriage of flavours made in heaven! Enjoy!

﻿
Posted by soulfood traveller at 7:39 PM