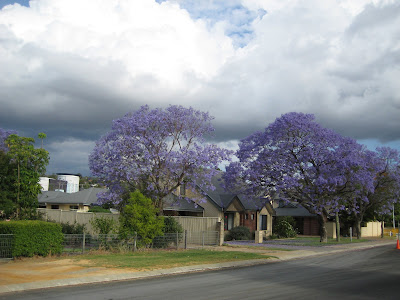 Thank goodness for a little light relief﻿﻿﻿﻿﻿ with the posh couple's saga, they have helped to distract us from more pressing and sad events down under. The jacaranda are in full bloom here and our street is bathed in lilac light,even soaring temperatures in the high 30's have been diffused by the carpet of blue. It is an appropriate colour. The country is blue and filled with a spirit of  mourning. As I write news has just come through that there is no hope of survivors in the New Zealand  Pike River mining disaster. Another 3 blasts have destroyed any chance of finding any of the husbands, sons, brothers or  fathers .......the collective pain of the families is overwhelming as we watch their faces on the TV. Our hearts and prayers go out to them with Christmas  just around the corner..........may the peace of the Christ child be there to uphold them and fill them with hope for the future in spite of their loss.
The Spirit of Australia, our "Flying Big Roo" is grounded. Not even the arrival of John Travolta for Qantas's 90th Birthday bash helped to diminish the impact of this blot on an impeccable record of air safety of the national carrier. In the middle of mopping up the oil leaks we did have a respite with the annual Perth Telethon.This amazing television charity drive for just one worthy recipient, the Princess Margaret Hospital for children, has managed to raise over 9 million dollars in 24 hours. This brings  its total amount to 100 million raised over the last 43 years, quite mind blowing. Almost all donations from private individuals, one family pledging to match donations to the tune of  a million dollars,and Julia Gillard our PM (aka the government),did chip in a cool million as well. This is a very rich country and the Aussies love this sort of thing and really step up to the plate. One guy, I think Superman in disguise, spent 26 hours, yes, you heard right, 26 hours non stop on an elliptical trainer to raise 40 thousand dollars. I can hardly do 20 minutes on the damn thing,  Anyone need a quick weight loss? You will shed 9 kilos guaranteed! You wont be able to walk for a week but who cares you will look just as good sitting down.
﻿


In an attempt to understand more of the collective Aussie psyche I have immersed myself in Australian literature, and have discovered a wonderful living Australian author,Tim Winton, who writes lyrically of this part of the country and his books are a joy At times like this I long to share the experience with my girl friends in the Schoenies Skollies Book club.Try and get a copy of "Cloudstreet" girls, the definitive Australian novel, you won't be disappointed. Another compulsive  read, horrifying and humorous, at times touching and at others inspiring, but  thoroughly absorbing is The Fatal Shore by Robert Hughes. This tome is a historical account of the birth of Australia which came out of the suffering and brutality of England's infamous convict transportation system. . Hughes states his intention: "To see the System from below, through convicts' testimony—in letters, depositions, petitions and memoirs—about their own experiences.”  As Hughes points out, “the post-colonial history of Australia utterly exploded the theory of genetic criminal inheritance.”
Whew well that's a relief!.........history lesson follows...........


In the latter half of the eighteenth century, Britain was changing dramatically. The population tripled between 1750 and 1850, and London's population doubled in the 20 years before Captain Cook landed at Botany Bay in what was to become Australia. It was a period of massive urbanisation, as the growth of the Enclosure system forced more and more people off the land.  Armies of rats roamed the streets of London. Occupational diseases and child labour (from as young as age six) were commonplace.  Gin, promoted by the gentry, was the escape (due to a surplus of corn there were no restrictions on its manufacture or sale).


Poverty, particularly in the cities, was extreme and crime was rife. England had many capital statutes (predominantly to protect property) and public hangings, which drew huge crowds, were the primary deterrent to crime. The proportion of capital convictions actually executed dropped from 69 percent in 1749 to 46 percent in 1788 (at the beginning of transportation). By 1808 it was down to 15 percent. However, there was an increasing shortage of jails. Transportation therefore answered a number of problems.


Initially the convicts were sent to the New World of America and the Caribbean, until the American Revolution. Britain then used old rotting ships (known as “hulks”), moored in the docks, as jails, believing that America could not hold out for long. The “hulks” quickly reached crisis levels. With an extra 1,000 convicts arriving per year, Britain needed a new area for transportation. Thus Australia was settled.


To understand what banishment to Australia meant, one must understand the geographical knowledge of the day. In the late eighteenth century, the world was largely unknown to Europeans. The interiors of most continents were still unexplored, and even North America had only pockets of population. Australia and Antarctica were terra incognito. Hughes points out that it could hardly have been worse if the convicts had been told they were going to the moon, “at least one could see the moon from England”.


The book tells of the enormity of the undertaking. The First Fleet, with Governor Arthur Phillip at the helm, consisted of 11 ships and nearly 1,500 passengers, of whom 736 were convicts. Some of the convicts had already been on the ships four months before the fleet set sail. It then took another eight and a half months to reach Botany Bay. Some of the convicts had died whilst still in England and about 3 percent died en route. The Second Fleet (the worst of all) lost 41 percent of the 1,006 convicts who sailed. Following reforms suggested by William Redfern (a popular surgeon of the colony and himself an ex-convict) the death rate would drop from 1:31 to 1:122.


Having decided that Botany Bay was unsuitable, the fleet established the first settlement to the north, at Port Phillip (Sydney) in January of 1788. With no skilled labour, few tools and thin soil, it was a struggle to survive the first years. The soldiers received the same rations and punishment as the convicts, which caused severe resentment. It was over two years before a relief ship arrived (with meagre supplies) .


Fully 80 percent of convicts were transported for crimes against property, compared to only 3 percent for “crimes against the person”. A further 1.5 percent were deported for “political” crimes (treason, conspiracy to riot, trade union membership, etc). There were examples of most of the working class movements of the period—Luddites, Swing rioters, Chartists. Almost 20 percent of Irish convicts could be called social or political rebels. The System treated them particularly badly “for fear of mutiny”.


The book also deals with the particular fate of women under the System. Some 24,000 women were transported, about 1 in 7 deportees. The System considered almost all of them to be prostitutes (though this was never a transportable offence). In fact, just about any woman who was not in a Protestant marriage was considered a whore. Though never policy, the practice was to send women of marriageable age, and marriage was certainly encouraged. Soldiers and officials would invariably have first pick. Since this might mean the end of their sentence or at least a reduction, most women agreed to it.


The  harshest of conditions were inflicted on the convicts. These are remembered by popular history, although incorrectly, as being most representative of the System. Only a minority of convicts were ever held in the secondary detention centres, “but they were absolutely integral to the System: they provided a standard of terror by which good behaviour ... would be enforced.” The authorities needed secondary detention centres for those who committed offences whilst in Australia (“the Botany Bay of Botany Bay”). Initially they used Norfolk Island, which is some 1,000 miles east of Australia. Port Arthur and Macquarie Harbour, both of which are in Van Diemens Land, (Tasmania) followed later. Port Arthur is the site of the infamous "Model" Prison system which preferred to break the convicts spirit by mental rather than physical punishment. Prisoners here were kept in total isolation, no contact with other prisoners,they were masked when they went out of their cells to chapel on a Sunday. and even their foot ware was covered so that their steps made no sound..The worse offenders were deprived of light and touch in strict solitude and some went mad. A lunatic asylum was built nearby to house them. Boys as young as nine were sent here to a special boys prison, many of them threw themselves off Point Peur, suicide was preferable to living in a place "worse than death"


By the late 1820s and early 1830s there were moves toward abolition. There were three main reasons for this—growing opposition from English reformers, the development of an alternative penitentiary system and also opposition from within Australia as it became a more established and respectable colony. By 1840 transportation to New South Wales had ceased. The general tendency then, particularly from the “well-to-do”, was to collectively forget about or bury the convict past.


Following the end of transportation to New South Wales, convicts were still sent to Van Diemens Land and Norfolk Island for another 13 years. Opposition to transportation continued to grow, but it was the gold rush of 1851 that sounded its death knell.

(Note: parts of the above description were taken from a review by Brian Smith, 1999.)

On a lighter note, Tommys house in Perth is sold, and all will be finalized in the middle of Jan 2011. We will then be officially "grey nomads" and have the green light to start our "groot trek". We are excited busy planning our route and will start in the new year  by heading for Adelaide across the bottom end of  Australia ...............across the Nullabor Desert.
The Bead Wagon rolls! We have started selling our beads at various Craft markets at the weekends and its great fun and proving to be a lucrative sideline. Now we can advertise as we travel! 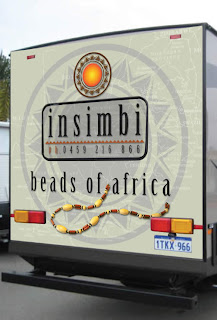 I am feeling nostalgic and missing my daughter.This was a recipe we baked together when she was a tiny tot, and most of the mixture was eaten before it got to be baked! She has since then turned into a "Baking Goddess" so continuing a generational blessing, and makes delicious and delectable goodies which are irresistible to taste buds! So in your honour Ems..................this is where it all started!

Grannies Rock Cakes (you can tell this is an "old " recipe no metric here!)


Sift flour and rub in butter till it looks like breadcrumbs.Add sugar and fruit and mixed spice.Mix in beaten egg and a little milk if the mixture is too dry. It should be a fairly stiff mixture. Put dollops of  mixture on a greased baking sheet ,sprinkle with a little extra sugar and cook in moderate oven 180. for 20-25 mins. Great for picnics and to munch on the road.  Easypeasy!
﻿
﻿ ﻿﻿﻿ ﻿

Posted by soulfood traveller at 10:01 PM

Email ThisBlogThis!Share to TwitterShare to FacebookShare to Pinterest
Labels: The kangeroo's down sport