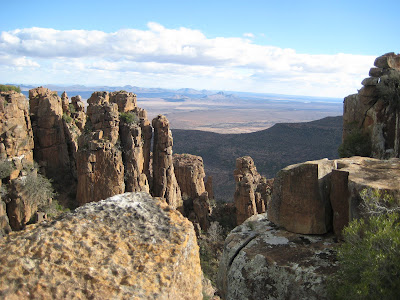 Well crammed into a metal canister for 11 hours and flying at the speed of 550 mph over 6,000 miles of ocean does eventually get you to OZ, but there is no sign of the yellow brick road. The wonderful Wiz was not there to meet me, but a stern Chinese immigration official stamped my "spouse visa" and told me I had not ticked the boxes correctly. You must tick inside the box! Not an auspicious start to my new identity as an Aussie. Fair go's mate, I expected a better welcome than that. At least a rousing chorus of Advance Australia Fair, even a few bars of Waltzing Matilda to greet my arrival, but they didn't seem too excited to see their new migrant. Even the blond hulk of a customs officer wasn't interested in my secret stash of chocs.

A week ago Chocolat's walls were reverberating to the sound of ripping tape as everything in the house was turned into brown paper parcels. Elliot's are Amazing, nothing escaped the brown scourge and if it didn't move it was wrapped. By the third day it resembled a post office with a serious sorting problem. And then it was all over. One red Studebaker 293 boxes and the collected memories of 20 years safely packed away in the container bound for Fremantle on the good ship Darwin and Tommy and I left standing there with a suitcase each of dreams.

Exhaustion overwhelmed us but we had a safe haven in the Italian quarter of Schonies where we were pampered and loved for our few last days by the Tonins. We took a meandering trip around the Karoo, visiting Tommy's old haunts and spent time at Graff Reinet and visited the Valley of Desolation. From the top of the Ouberg the Groot Karoo with its stark beauty stretches for miles in all directions. Spandaukop like a flat topped sentinel stand guard over the small Karoo dorp. In the days of the Boer War the commandos used it as a lookout and a refuge from the British. There was a secret route to the top but the climb must have been treacherous. The valley is enclosed with huge dolerite columns of stacked rock and its a dizzying drop to the bottom.

I had a small silver angel medallion in my pocket.It was given to me by my precious sister when I was going through a particularly dark time. One word, HOPE, was inscribed on the back. On a whim I threw it as far as I could into the chasm. Two courageous and wonderful people who are dear to me are battling cancer at the moment. Maybe a tiny piece of HOPE in the midst of desolation is what is needed to turn the tide in their favour. I pray so.

Now I am busy settling into the Aussie way of life which can be confusing at times. The attitude of officialdom is pedantic at best but there is a strange and rather endearing whimsical side. Here we have "pre-loved" cars not second hand, and go to a garden center and you can buy tiny seedlings called "fairies". it all comes tumbling down of course when you go back to the car park and find a car parked next to you with FIWAOFOM on its bumper. "Fit in with Australia or **** off mate!" Now that's more like the Aussies I know!

A visit to the local supermarket to buy groceries is mind boggling and time consuming. I spent an hour just looking at the choice of vegetables many of which I didn't even recognise. Dorian fruit ,like a large shaven hedgehog looked interesting. I am told it tastes heavenly like creamy sweet custard if you can get past the smell, which is like a combination of sour milk, old tackies and dog poo. In Malaysia where they grow you are not allowed to take them on trains they are so pungent.Reminds me of that tale in Jerome K Jerome's book Three men in a Boat when he repels people from his railway carriage with the smell of his strong cheese. Its hilarious and a book that deserves to be read at least once a year...I digress. I think I'll pass on Dorian fruit and save that experience for later.

Now the wine is another matter. The rule of thumb here is not to buy cheap, the cheaper the wine the more ridiculous the name. How about a drop of Dancing Chook, Rusty Ute or Kanga Rouge? No. Well here's a nice Chardonnay called Slippery Fish....one critic is quoted as saying " the best thing you can say about this wine ...is that's its wet".Mind you I have drunk some delicious wine from Margaret River called Greedy Sheep and Swooping Magpie, so its not all bad. I'll keep you posted when I'm sober.

I am awake most mornings at 3 a.m., jet lag lingers. By lunchtime I am ready for bed. In-between I have managed to make some delicious Kumquat preserve made from cute miniature oranges like drops of sunshine. The trees in Tommy's garden were laden with fruit so sweet I couldn't resist making a batch. This preserve is delicious on toast for breakfast but is also great with cheese and biscuits to round off a dinner party.


Kumquat preserve (Spread some sunshine on your toast)


Rinse the fruit well and soak overnight in cold water.
Drain and weigh the fruit, you can leave them whole or slice into little rings.
Put into a heavy based pot with the equal weight of water, and bring to the boil. Reduce heat and simmer till the fruit is soft, takes about +- 20 mins.
Add the same weight of sugar and bring to the boil again. Boil till setting point is reached . (Jam crinkles when dropped on a cold plate and pushed by your finger. Don't burn yourself!)
Pour into clean glass jars and seal with melted candle wax.
Keeps well.
Try it folded into bought ice cream and refreeze. As a filling for a sponge cake with cream, or even as a base for orange sauce with roasted duck.
Hm mm......now that's lip smacking.
Posted by soulfood traveller at 8:38 PM