﻿﻿
﻿﻿
What a start to the new year. One half of the country plagued with floods and the other half fighting bush fires. Like most Australians I have been watching TV footage of the unfolding disaster of the relentless floods in Queensland and now moving into Victoria. The sheer scale of the devastation is overwhelming. Imagine an area the size of France and Germany under water and in some areas the flood level reaching 30ft or more. The inland tsunami that ravaged Toowoomba  and parts of the Lockyer valley was so violent, one body was recovered 80 kms downstream from where he was swept away. We watched with horror as one family climbed onto the roof of their car , the mother and son were picked up by a helicopter, but the father disappeared before they could go back for him. The statistics are mind blowing with figures of 70 million tons of water in 74 hours flooding Brisbane, 7,000 insurance claims worth an estimated $365 million, (but many are not covered for river encroachment so face a  lenghty battle for compensation). It will cost the nation 30 billion dollars to rebuild and restore. But forget the statistics and get back to the human cost. So far 20 dead and many more  missing, most of them from the small village of Grantham, where whole houses were swept away, farms decimated, livestock drowned . For many of the victims they face an uncertain future, mortgages still have to be paid for homes that are no longer habitable or just not there. The cost in human suffering is incalculable. Families and communities in the rural areas are close knit and one loss affects everybody. In the midst of this terrible tragedy there are stories of tremendous courage. One young boy insisting they save his brother first, he and his mother were then swept away before they could be helped. Strangers risking their own lives to save people trapped in cars. Parents pushing their kids onto the roof of their home for safety only to be dragged under by the raging flood before they could pull themselves up.

﻿﻿﻿
﻿﻿﻿I have been been moved by the way the  Queenslanders and their fellow Australians from all over the country  came together to support one another through this terrible time. The Aussies have a remarkable stoicism in the face of adversity and this coupled with their unique sense of humour  "she'll be right mate" help us to remember what really matters is not the loss of possessions or property but looking out for your neighbour. We have been  fortunate to experience that ourselves from fellow travellers. Wherever we find ourselves we are encouraged  by the positive feedback we receive, helpful advice and great companionship. We saw the New Year in with great crowd of friendly Aussies and a couple of Kiwis.........so to Carol, Nev, Maureen , Dale, Cheryl , John,Chris and Greg........Cheers and thanks for a great evening  from the colonial sheila and the Big T

Catch yer later on the road again sometime!
﻿﻿﻿
﻿﻿﻿ It has been a month since we set out on our journey and opted for the simpler way of life. We have bought a solar panel which we have fitted on the roof of the van and now we can stay in places where there is no electricity. Fresh water will be our only restriction. Living in a confined space has its challenges,there is definitely no space for mess.Clear up or move out!  I am learning that I can cook perfectly well with just one pot, in which I mix,bake boil,and stew and have adjusted my menus accordingly........if it isn't on the barbie its potluck. I have rediscovered the joy of bread making and make a mean soda loaf. Tommy has become the "Marron catcher extraordinaire" and with the produce from the local farmers markets we are eating like kings.An indispensable  item is one that can multi task, like our portable freezer which works off our batteries and doubles up as a coffee table,foot rest, ironing board and dumping point for anything that needs a home. My wardrobe now consists of a couple pairs of shorts and assorted  T's ,and I am setting the new fashion trend in camp wear with  kikois,which I can always whip off and throw on the table when we entertain. This is, as you can imagine, or perhaps not, makes for a great ice breaker! Less is best has become our mantra as we aspire to only own as many things as we genuinely need.......and more importantly realize we can only tow so much. I have never felt more liberated. 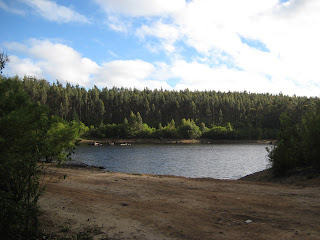 Its marron season and yesterday armed with our "chook" pellets for bait and our license we spent the evening at the local dam.It was a beautiful calm night,the sky chock a block with stars which were reflected in the dark water. The kookaburra laughed goodnight to us from the jarrah trees, and  dozens of frogs serenaded us with a rasping chorus.As we pulled in our nets it looked like we were catching stars not crayfish.  Today,the romance has faded and  I have the task of cooking the catch. This is not an easy task. They are remarkably frisky and object strenuously to becoming gastronomic delights. The water boiling ,the first two safely in the pot, I tried to extricate a large marron from the bag. The remaining marron had decided on an "all for one and one for all" policy and clung grimly together with their pincers locked  in a long chain. I grabbed the first one and tried to swat off the rest with a wooden spoon. It proved to be my undoing. The large marron dropped onto my bare foot maliciously nipping my toe. In the ensuing panic to shake him off I tripped over the bag and his comrades decided this was as good a time as any to make a dash for it. In a flash the floor was covered in scrabbling crustaceans, with the chef hopping around on one foot trying to scoop them up with a plastic sieve..........Master chef  it was not.....oh the joys of the simple life.

This is a great accompaniment to a dish of grilled crayfish, looks pretty too. But is great with everything that you feel needs a bite or a "zoosh" up in flavour.

Blitz together in a blender and put in a jar. Keeps for ages in the fridge.
Watch out for the bite!
Posted by soulfood traveller at 8:57 PM 0 comments