﻿﻿
﻿
﻿
﻿ ﻿ ﻿﻿
Two days anxiously watching and waiting for Cyclone Bianca to hit us with expected winds of 120ks an hour  but luckily the lady was a no show. We didn't even need to tie the kangaroos down mate and  finished the month with a whimper and not a bang. Poor Queensland wasn't so fortunate with Yasi ,devastation of homes and farms near the coast but thankfully no loss of life, in fact three babies born, imagine they will dine out on that story all their lives..........but guess we wont be having bananas any time soon. One of things I am trying to come to terms with living in Australia is the sheer scale of the disasters they have here.Nothing small about this country,and their hearts are just as expansive. It is time for us to be moving on. We have mixed feelings. The longer you stay in one place the harder it is to move, and Quininup has become a special place for us. We have loved the camaraderie here in the camp and have made some good friends. We celebrated my first Australia Day with bunting flying from the awning and the fishing rod as a makeshift flagpole. Had a  traditional "breakfast barbie" with  Carol and Nev who cooked up some great Aussie tucker and spent the day waltzing with the roos. I now have a tame "28" parrot, who has lost his tail, (does that make him a "14" I wonder.).............we have named him Waldo, don't ask me why.  He has taste for sunflower seeds and will happily munch handfuls but  attacks any other parrots who dare to muscle in on a free lunch. 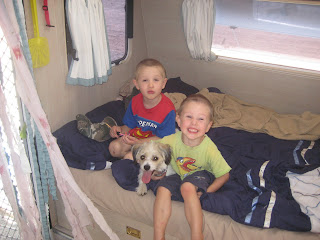 Jenny and Jack with their two small boys, Jackson and Braydon and not forgetting Scruffy the dog, have spent the last sixteen months on the road.They have been in Quininup for the last eight as caretakers of the park.  They opted out of the rat race,selling up their business in Queensland to spend more time together as a family. Home is a 16 ft caravan filled with all their worldly possessions. I take my hat off to them, not many of us would have the courage and resilience to bring up a family in such a confined space. Though they do have one enormous advantage, the whole of Oz is their backyard. Whilst they have been here they have managed to grow tomatoes and cucumbers up their awning ropes. I am filled with admiration as Jenny  home schools  the computer savvy  boys with  the help of S.I.D.E.  (Schools of Isolated  and Distance Education). The boys have a taste for rice smothered in balsamic vinegar.......maybe some budding gourmands! They love the adventure of the open road with  new places to explore, and they will be heading off soon to the Eyre Peninsular in South Australia and no doubt Jackson and Braydon will be fishermen like their father the next time I see them. Travel safe guys.
﻿
On one of my walks around Karri Lake I came across a family of Emus busily eating blackberries. I don't know who was more surprised, them or me.The adult and six babies eyed me in alarm,gathered themselves into a line like a miniature group of burlesque dancers and sashayed off their tail feathers bouncing. Their choreographer chiding them on faster with clicks "C'mon girls ,shake that bootee and give them a grand exit!" The female Emu is a liberated bird. Once she has mated and laid her clutch of aqua blue eggs she hands over all responsibility to her husband. He then sits, hatches and generally cares for his brood till they are large enough to fend for themselves. Can't you just picture it........."That's it honey......I'm off to join the girls down at the Bramble Bar, catch yer next year for a bit of whoopee.".... now there's food for thought.

Ye ha!  I am dusting off my hat, squeezing into my jeans and heading  inland to Boyup Brook for the Country Music Festival for five days. Hoping the local cowboys and girls have a liking for beads as I have been busy decorating cowboy hats  Intsimbi style.
Wagons roll!

This is a delicious dip to share around the barbie or whenever a group get together for "happy hour" Feeds many! 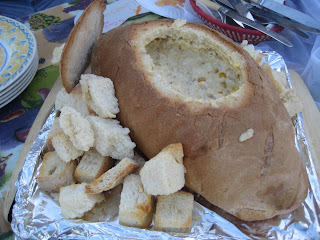 Slice the top off the cob loaf. Remove the inside soft bread. Place cob on a baking tray. Cut the soft bread into small strips and arrange the extra pieces on a separate tray, spray them with oil.
Fry bacon and onion in a little oil for 2/3 minutes. Cool. Place in a mixing bowl and add other ingredients. Mix well and add salt and freshly ground black pepper to taste.Spoon into prepared loaf. Place the top back over the cob.
Bake the loaf at 200C for 25 minutes, then add the bread pieces to the oven. Cook the loaf and bread pieces for a further 10 minutes or until the filling is hot and the bread is crunchy.Wrap in foil until ready to serve. Serve at room temperature. Use the smaller pieces of bread to dip first and then break up the cob loaf from the top as you work your way down to the bottom. There won't be any left, believe me! Delicious.