Diesel, Dust and the Dreamtime


Some two thousand generations of men and women have lived and died since the first Aboriginal walked upon the soil of this land , now known as Australia.  Forty thousand years since the beginning of the Dreamtime.  In the beginning the earth was featureless, flat and grey. There were no mountain ranges, no rivers, no billabongs, no birds or animals, in fact no living thing...........then came the Dreamtime. Giant mythical Beings rose up out of the great grey plains where they had been slumbering for centuries; they looked like animals or plants or insects but they behaved just like humans. As they wandered in search of food and water they dug huge ravines and rivers,pushed up mountains and gradually the earth as we know it today took shape. Aboriginals believe their ancestors were taught by these mythical Beings and how as their descendants they should behave. Then the Dreamtime ended, and they were left with rites and ceremonies to preserve this heritage. Tribal lands and all forms of life contained within it are now held in sacred trust. Land  has a very special meaning to Aboriginals for all over the land are features which remind them of these Beings who had a part in their creation and the truth of the connectedness of all things, both living and dead. 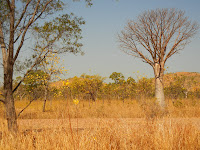 These are our last weeks in Western Australia, and the diversity of the scenery in this state is remarkable. The road from Broome to Derby and Kununurra in this part of the Kimberley region is so like Africa,especially Kenya or Zimbabwe. Savannah doted with Baobabs and yellow flowering kapok trees. It made me very nostalgic. I keep scanning the bush for buck, zebra or giraffe but alas only the odd Roo.
A day trip to Wyndham , the northernmost town in Western Australia . Its dry, dusty and has a dubious claim to fame for the most beer drunk per capita in the whole of Oz .......I  can see why.  Not a lot here, but at the Five Rivers lookout you can (predictably enough) see five rivers at one time. The homestead scenes in the film Australia were filmed here and the local museum was a wealth of quirky information. In its hey day it was the center for the meat processing industry and Johnson's Fluid Beef aka Bovril was made here in HUGE quantities.........if you could see how they made the stuff (the old photos were pretty graphic) you would never touch the stuff........VEGEMITE RULES!
﻿﻿﻿

Derby will be remembered for the meal the sand flies had of Tommy's legs........ and a meeting with Margaret,a wonderfully colourful colonial lady originally from East Africa and editor of the local paper,The Muddy Waters. Then on to  Kununurra famous for  Pink Argyle Diamonds and a too brief friendship forged with Geoff and Kaye Brown, lovey people from Dalmeny NSW......... what a lovely daughter.....now they would be great in-laws................ well a mother can dream can't she!
﻿﻿﻿
﻿﻿

A last few days at Lake Argyle and  another memorable swim this time in the infinity pool overlooking the lake. Tommy caught and lost a HUGE fish in the Ord River..........he has witnesses. 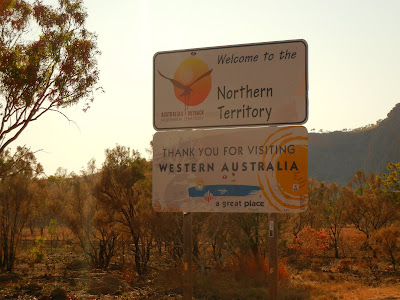 Mix all together and chill in the fridge. Great with fish and seafood.and in tacos
Posted by soulfood traveller at 1:23 AM

Email ThisBlogThis!Share to TwitterShare to FacebookShare to Pinterest
Labels: Diesel Dust and Dreamtime